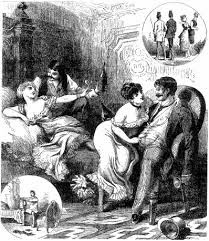 A is for Area. When I was first taught Police Criminal Law, one of the mainstay pieces of legislation was The 1824 Vagrancy Act, which had been passed to deal with the aftermath of the Napoleonic Wars and the begging and vagrancy that it created. One of my favourite pieces of legislation within the act was known as 'being found on enclosed premises'... where the act actually said... every person being found in or upon any dwelling house, warehouse, coach-house, stable, or outhouse, or in any inclosed yard, garden, or area, for any unlawful purpose; as a suspected person or reputed thief, committed an offence. An area is what we would probably call a basement today, and related to the sub-pavement premises which had a small 'area' from which access was gained.
I made loads of arrests using that same power in the 70s and 80s...very useful and still serving a purpose!
at April 10, 2015