An A to Z of Victorian Crime and Culture - B 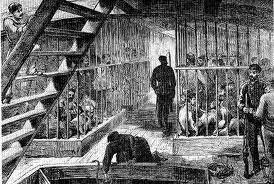 B is for Borough Boys, and of course, Beddows - but you can read about them on other links on my website at www.1455bookcompany.com.

B is for Boated (or getting the boat), something that many we still had the option of today. This is the option to transport convicted felons to our Colonies... which many preferred over the thought of Jack Ketch or the Workhouse.

Many of my family (the Irish side - Crawleys, O'Crawley, O'Crowley) who had a propensity to steal horses, fight, and murder... suffered this fate.

The last convict ship, the Hougoumont, left Britain in 1867 and arrived in Western Australia on 10 January 1868. In all, about 164,000 convictswere transported to the Australian colonies between 1788 and 1868 on board 806 ships. (Courtesy of wikipedia).

B is for bit faker - one of the curses of 1850's Leicester was the ability of so many to create counterfeit coins - a prolific offence, and with coins in 1850 having a value equivalent of 45 times those of today, to a poor man, even a counterfeit ha'penny or penny offered a profitable way of living.
at April 11, 2015