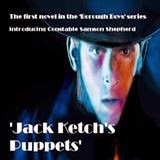 J is for - Jack Ketch's Puppets - the first novel in my series about The Borough Boys... say no more!

J is for John - John Beddows - Detective Sergeant John Beddows is one of the original fifty officers employed by Leicester Borough Police in 1836.
Promoted to a Sergeant for his exemplary courage and knowledge, he was 'busted' to Constable second class due to his thirst for Ale, as was so common a curse in this period of Leicester's history.

Hard but fair, he is Sam Shepherd's mentor, and he takes Sam under his wing, demonstrating the skills Sam would need to not only thrive, but to survive, in a pretty lawless and violent emerging Industrial Town.
Stocky, craggy, battle-scarred and hard, he is a fearsome adversary, and backs down to nobody. Re-promotion is his reward by book 2.

J is for - Jack - the Victorian Slang name given to a detective.

J is for - Jemmy - a house-breaking instrument.