Some months ago I began a process of seeking new and contemporary authors that I thought would be of interest, to interview for my website and ‘Fan page’.

One such volunteer was Steven D Malone, the author of a fascinating historical novel ‘Sideshow at Honey Creek’. 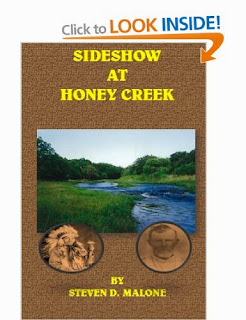 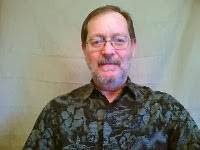 Steven has been sitting patiently whilst other projects and personal issues have distracted me, but time has come to give you all a look into who and what Steven is and does...

Steven, thank you for your patience and perseverance!

Q1 - For the opening self-introduction, how would you like to be described - the man and the author...?

I have a friend who once honoured me with the words I could never create on my own that I would want on my gravestone. He said, ‘you know what I’ve always liked about Steve, what you see is what you get’. So, as a man, I want to be found without pretence and without guile. I’d like to be known as a gentle man and an honest one. At the same time, I’d like to be known as something of an iconoclast, a man that gives short shrift to the propaganda and ‘spin’ we are fed about our institutions and our patriotic and religious myths. We need truth in our society and in our spirituality. We seldom get it.

As a writer, I want to be known as a creator of living characters, living settings, and surprise. I want to write prose that sings in a way that gives readers a chance to create their own vivid images so that they also participate in the creative act of the story. I also wouldn’t mind causing a wry ironic grin on my readers’ faces either.

Q2 - I know from our previous interactions, that like me, you have a penchant for historical fiction. and your first novel 'Sideshow at Honey Creek' tells a tale of fiction, but at the same time gives readers a lot of history of which they were probably unaware. What was the factor that drove you to write historical fiction, and more specifically, the driving force behind this first novel?


They say that imitation is the finest sort of flattery. I’m a reader. My friends and family might say that my reading has achieved the status of a vice. Of all the things read in my life, historical fiction brought me the greatest joy. I also know that history is biography for men and women make history by struggling through the turmoil and circumstances of life.  History can be very dry – historical fiction breathes life into the renderings of events. So, I write historical fiction to honour those authors that brought me that joy.

Sideshow was born from the researches done by my Mom and Dad. When my workaholic Dad retired, someone advised him that new retirees don’t live long without some new commitment. He chose to devote himself to genealogy. Mom followed him into it. To everyone’s surprise, they found that our families were true American colonists and pioneers who founded towns, who dripped blood onto most of the battlefields of all of America’s wars, and whose lineage traced back to Irish and Scottish royalty. What they discovered can give me a lifetime of very human stories.

The story of my great-great grandfather, arriving in Texas when it was a Republic, gave the seed that grew into the novel. I published Isaac’s biography in the article Ike Malone – Westerner in True West magazine (Feb. 1993). I seemed an easy leap from the article to the novel.

Q3 - It is interesting that we also both have a shared love of Genealogy, and that it has breathed life into your work. How do you / would you use the Genealogy resources that are so widely available today on www. to give depth, colour and flavour to Historical fiction?

For me, it is the family histories – the family stories - that seep into the more sterile lists of births, deaths, marriages, and confirmations that form the bones of genealogy. Wonderful are the writers of genealogy that include those stories, copied letters, and documents. I lucked into finding several such writers that wrote ‘genealogies’ of my family and those related to mine. One included a family legend of a great uncle that was a front man for the Dalton gang – one of the more notorious gang of bank robbers in the American West. Another included a letter written by a great-great aunt describing the wagon train she in which she rode to Texas being warned (by several bedraggled Texas Rangers riding up in the dusk) against Comanche raiders nearby on one particular full moon night. The full moon in Texas was referred to as the ‘Comanche Moon’ and Texas settlers waited in fear on those long nights. My father found a pay chit describing deductions for food and damaged kit for my great-great-great-great grandfather soldiering during the War of 1812. I know from that what coin was in his pocket, what he ate, and what he lacked 13 months before he died of pneumonia. My father found that his death left his wife a legacy of seven dollars and a bed and allowed her to be named a ‘head-of-household’ on tax records in South Carolina as early as the 1820 census – a very rare thing for a woman in that time. These snapshots of living people breathe that life (and some reality) into my stories.

Q4 - What would be your recommended Genealogy resources for anyone considering using genealogy to validate their writing, and what in your opinion does each of those resources offer the writer?

Most recently, my wife and I found http://www.thegatheringireland.com/ to be very helpful in tracing ancestors in 18th century Ireland.

I hate to disappoint readers wanting specific recommendations. I cheat. I’ve inherited copious amounts of material from my parents who were master level genealogists. These boxes of files gave me thousands of names, dates, and locations. I go fishing by entering a name, date, or a location into Google. Tens of thousands of good people proudly shared their lineage and family legends in this public forum. A quick search through a few Google pages stir loose many great story ideas.

And, I’m old enough to be enrolled in the ‘Old School’. I like books. I live near a large city that has a wonderful genealogy library. I skip the files and go to the linage books folks have published (usually through vanity presses). There is a treasure trove of family stories, legends, and letters collected within. A little thumbing unearths material that sparks vision after vision – the seeds of a thousand stories.

Don’t forget to search Census records, tax records, wills, and newspaper archives – all public records and open for perusing. (I once found a story in the Waco, Texas newspaper where the editor described himself standing in the shade on a morning in 1876 watching the city come alive and seeing my great-great-great grandfather coming into town on his freight wagon to trade cotton and skins for notions and dry goods to stock his supply store in Hico, Texas. So, for one moment in time, I knew exactly where he was and what he was doing. This was included in an article I sold to ‘True West’ magazine.)

Genealogy records not only add depth and flavor into my work, they also are a great stimulus when fighting writer’s block.

Q5. From your answers to Q3 and Q4, you clearly have a treasure trove, filled with nuggets of interest about your families (your own and your good lady's) from the past. If time travel was a possibility, would you wish to change places with any one of them? If so, which one(s) and why?

What a hard question. There is something of the wanderer in the family genes and they were everywhere. Therefore, many choices dance in my imagination. My father’s mother descends from ‘Border Reivers’ in south-western Scotland. One even participated, with Robert Bruce, in the murder of ‘Red’ Comyn earning the family crest. There are the vaguest of hints that this family come from Irish raiders in Dal Riada that may have allied with British kings to resist the Picts in the 6th Century, roughly in the Arthurian era. I have an ancestor that fought the British during the War of 1812. Another that volunteered for Confederate service fighting in the Western Theatre of Operations. After the war, he may have served as a security guard for mining operations not far from Tombstone, Arizona. He did herd sheep in far west Texas though it is unknown if he had trouble from the cattlemen of the area. A great-great cousin use to ride on the finest of steeds and dripping with rifles and pistols into my grandmother’s house to ‘hole up’. The family was sure he ran with the Dalton gang of bank robbers. Pick one. I can’t decide myself but each of the times fascinates me and I would visit any of them.

Q6. Would you like to tell readers what they should be on the lookout for in terms of books to come from Steven D Malone, Author? Are there any significant W.I.P. or future projects that are in the pipeline?

I am a writer of tomes. It is my curse. My WIP’s take too long but I’m working. One is a kind of sequel to ‘Sideshow at Honey Creek’ that deals with the fate of unreconstructed Rebels and the efforts to get to Brazil after the Civil War. Another is Historical Fantasy Fiction that deals with the last days of pagan Britain as the pagans resist the onslaught of Saxon Christians. My most recent focus is developing a fantasy about a luckless Lothario cutting a way too Romantic figure in the early 1970’s or late 1960’s.